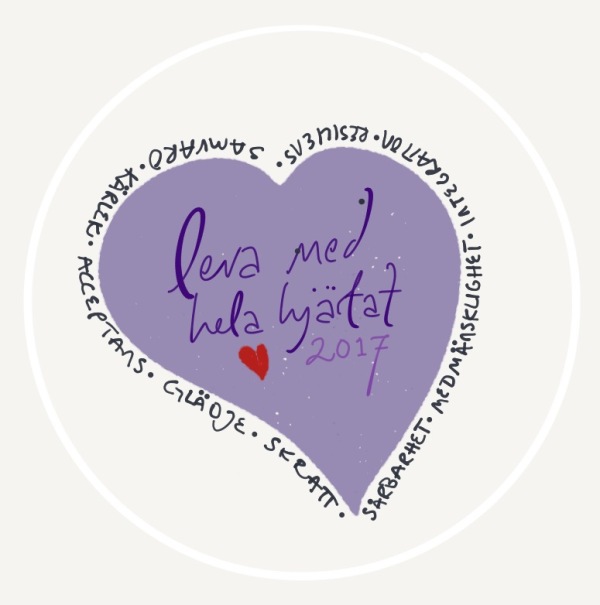 How do you show up in the world? What’s the energy you bring with you, into that which you are, and that which you do? It’s interesting that, how energy shows up, how the feeling behind the words matter so much, often more than the words themselves.

I stumbled upon a quote by Marianne Williamson the other day about this: 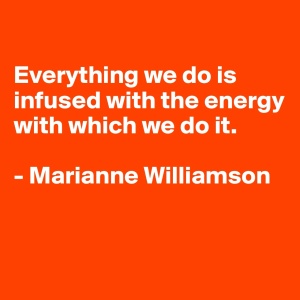 Marianne Williamson is also the lady behind these words (wrongly attributed to Nelson Mandela), which you may have seen before:

“Our deepest fear is not that we are inadequate. Our deepest fear is that we are powerful beyond measure. It is our light, not our darkness that most frightens us. We ask ourselves, ‘Who am I to be brilliant, gorgeous, talented, fabulous?’ Actually, who are you not to be? You are a child of God. Your playing small does not serve the world. There is nothing enlightened about shrinking so that other people won’t feel insecure around you. We are all meant to shine, as children do. We were born to make manifest the glory of God that is within us. It’s not just in some of us; it’s in everyone. And as we let our own light shine, we unconsciously give other people permission to do the same. As we are liberated from our own fear, our presence automatically liberates others.”

I am getting to know myself, light and darkness alike, and find it interesting to ponder the way I do show up in the world. When do I let my light shine? When am I immersing myself in my darkness? And what difference does it make for you and the rast of the world, in how I show up, when I come from light versus darkness?

I don’t know. Or rather, I know how it feels within me. I know what the difference is, to me, for when I come from the light vs darkness within me. Now, I actually believe there is a great deal to learn from both those sides of me. Both, by the way, makes it sound like I have one light and one dark side within, when it’s likely millions of sides within me, constituting my light, and my darkness. Constantly shifting, evolving, moving. Sometimes expanding. Sometimes shrinking. 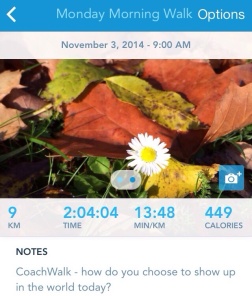 But all the time, whether expanding or shrinking, influencing how I show up in the world. And that’s just it. I want to show up, as I am, in any given moment. Nowadays it’s more rare for me to try to pose, put on a show, act as something which I am not. It happens though. And it’s very familiar to me, since it’s something I’ve struggled a lot with.

You see, I used to believe that my worth lay in the fact that you liked me and believed I was knowledgeable. That’s why I pretended to know everything. Putting on a show of being in the know, even when I wasn’t.

Now, less and less. It still happens, probably on a daily basis if I’m being honest. But it’s no longer my default mode, pretending to know. Because really – I don’t. There’s so much I don’t know, and today, that doesn’t frighten me the way it used to. Because that’s what that show was all about. My fear of not being worthy. Believing my worth lay outside of me.

That’s no longer the place I come from. It’s no longer how I show up. And I enjoy it, but it’s also very uncomfortable at times, let me tell you. Sometimes I really want to let rip unto the world, some injustice I believe have been done unto me. But many times, that urge quickly falls away, because that’s also something which I’ve gotten better at, namely to act, rather than react.

Hm. Perhaps that’s the biggest factor in how I show up in the world today, now that I come to think of it. I act. Much more deliberately.

That might sound as if it’s even more of an act I put on by being deliberate, but really – no, I think it’s the opposite. Because by giving myself that pause, that moment to look at where I am coming from, I am neither slave to light nor darkness within me. I get to chose how to show up in the world. And so do you. Ever given it any thought?

I follow Marianne Williamson on Facebook, and stumbled upon this today. I immediately emailed the link to myself, to make sure I wouldn’t forget about it:

”I think the most important question facing humanity is, ‘Is the universe a friendly place?’ This is the first and most basic question all people must answer for themselves. “For if we decide that the universe is an unfriendly place, then we will use our technology, our scientific discoveries and our natural resources to achieve safety and power by creating bigger walls to keep out the unfriendliness and bigger weapons to destroy all that which is unfriendly and I believe that we are getting to a place where technology is powerful enough that we may either completely isolate or destroy ourselves as well in this process.

“If we decide that the universe is neither friendly nor unfriendly and that God is essentially ‘playing dice with the universe’, then we are simply victims to the random toss of the dice and our lives have no real purpose or meaning.

“But if we decide that the universe is a friendly place, then we will use our technology, our scientific discoveries and our natural resources to create tools and models for understanding that universe. Because power and safety will come through understanding its workings and its motives.”

”God does not play dice with the universe,” – Albert Einstein 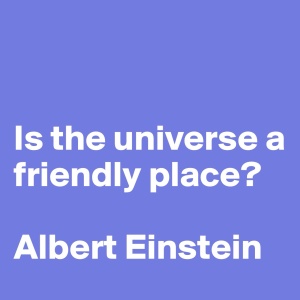 I’m not sure I’ve always believed the world a friendly place, but I do now. I do, fully…. and yet, sometimes I stumble. It happens that I forget the sun is always there, behind the clouds, and at times like that, the world can seem like a really cold, hard and unfriendly place. I know when I wake up tomorrow, or the day after, that thought will be gone, and a new one, affirming my belief that it IS a friendly place, will pop up. I also know, if I cling to the thought of the world being an unfriendly place, a new thought will take longer to appear.

And truth be told, it’s easier for me nowadays, knowing it’s all thought, to rest in the feeling of the day, whether or not if it makes me feel high or low. But all the same, I’m only human, and right now I sure long for a new thought to pop into my conciousness, because I really really don’t like to hang out in the cold, hard, unfriendly universe at all, do you?