I listened to Parker Palmer giving this commencement address to the graduating class at Naropa University, and several times I got goose bumps and shivers. For me, those have become telltale signs that there’s something important and/or very true being shared.

The six suggestions Parker provides on living a life worth exploring are simple. And powerful. So powerful I followed my urge to split this recommendation into six consecutive blog posts. You can read my thoughts on the first and second suggestion here.

There is no other, that is not also a part of you.

I’ll write that again: There is no other, that is not also a part of you.

So be hospitable, curious and meet the world with the same sense of adventurous journey of discovery that you hopefully have embarked upon within yourself. There is no need to be afraid of otherness. Or rather, you do not need to act upon the fear. You can see it, witness it, and let it pass through. Because you are meeting yourself, when you come across someone, something, which you do not recognize, that feels new and different and unknown to you. That is how to grow. That is how to benefit the world. And that is where my hope for the future lies. Just imagine what will be made possible when we no longer fear otherness. I can see it in my minds eye. Can you?

I am so sorry, so very very sorry.
For the way it has become.
For my part in it.
For whatever it is that made it this way.

I’m also very tired. Tired of carrying the feeling that there is something to be on the look out for, and that something doesn’t contain any niceties. On the contrary. In something there lies harsh words, needles causing tiny pin pricks, at times just one or two, other times loads of them; sometimes very general, othertimes oh so easy to tell that I’m at bull’s eye and the dart arrow hits right smack in the middle of it, or at least that what it feels like.

Perhaps more than anything, I feel sad about the entire situation. Because I just don’t see the sense in it. And perhaps that affects me more than the rest?

I used to want to make sense of the world, order and structure it to suit my liking, because that made me feel safe and good. I’ve let a lot of that go, but in this instance, at least right now, within my current state of mind while writing this (and who knows if I’ll ever publish it?), I would like to make sense of it.

Won’t you please tell me? Why the animosity? What’s with the pin pricks? What within you makes you believe that’s the way forward? What value do you get from this behaviour? How does this serve you?

I know it doesn’t serve me, at least not in a glaringly obvious way. Perhaps deep down on an unconcious level it does somehow…. what do I know? But it sure doesn’t feel like it does me much good. It drains me of energy. And it’s made me go off one of my favourite pastimes. And that’s a shame, because I really liked hanging around there. Not so much nowadays.

I struggle to make sense of it, and cannot. I uncover a fear or two, that I think can be contributing causes, but, seriously, this has gone on for too long, there has to be more behind it, than just a small fear or two. 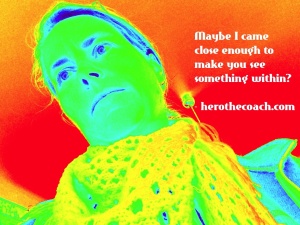 So maybe I did get really close? I certainly let you in, and perhaps, in my loving, I did touch you? Maybe I came close enough to make you see something within you, that perhaps scares you even more? Can that be it?

Well, what do I know?
I don’t. And it’s really not for me to find out either.
I just wish it would stop. I would like to be friends, but barring that, friendly or at least civil would be a great start. More than anything I would like to prove this isn’t how it has to be:

So what do you say, won’t you please take my outstreched hand and together we can turn a new leaf, start afresh from here, forget what has been and be in the now?

The other week I had a coaching experience that was something else. It touched the silence, and it’s a genuine privilege when that happens. I don’t know if you’ve ever been there? It can happen in any situation, but I’ve personally only noticed it in conversations.

What I notice is that each participant (and it can be more than one, I’ve experience this in larger groups as well) goes quiet. Not necessarily silent, but more quiet. Voices go softer, more quiet, and there is an almost tangible silence to the conversation, there is something else there. If I was religious I’d say God became present, or participating, and in a way, maybe that is just what happens. Only, I believe we all carry ”God” within us. That higher power embodies us all, but we don’t always feel it, experience it, or even remember it’s there.

But we do. And when we touch the silence, that higher power within is very much alive and thriving. This is not something that require a specific setting to come about though, as it’s always there. We have the potential to tap into this higher power at all times, because it’s within us. Always. It’s also what connects us. All of us. At all times.

This might come across as though I’ve suddenly been born again, somehow, and you might think all sorts of things about that. But, I don’t care about that, I won’t let my thoughts about what you might or might not think, limit me or my writing. This is my experience and I use this blog as a way to journal, I guess. I journal my experiences, my insights, my ponderings, my questions.

I wrote above that I’ve only experienced this in conversations. 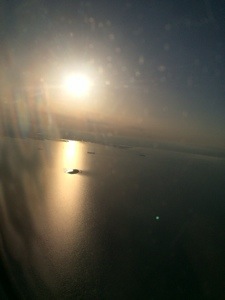 But, now that I think about it, that’s not true. I just realized it to being akin to the feeling of flow. And flow is something that I’ve experience by myself many times. I don’t always remember instances of flow, but since I’ve been out flying quite a lot this year, I have noticed that I do tend to end up in flow, on planes, when I bring out my miniPad and write blog posts. Times just wiz by, and I am left with a number of journal-entries/blog posts. Call it whatever you may. But in one sense, they represent moments of me touching the silence, capturing it onto paper, saving them for posterity. Like photographs. A snapshot of my state of mind, at that very moment.

Have you experienced touching the silence, and if so, would you please tell me about it? I’d love to know if this way of describing it resonates with you?

Had a great coach session with my coach today, and he sent me this wonderful quote by William Butler Yeats afterwards:

”We can make our lives so like still water that beings gather about us that they may see, it may be, their own images, and so live for a moment with a clearer, perhaps even with a fiercer life because of our quiet.”
– William Butler Yeats
(Earth, Fire and Water – The Celtic Twilight, 1893)

It came about, since we talked about the feedback I’ve gotten from people, saying that I have this calm about me. And the interesting thing is, for most of my life (up until the last few years), calm would not even by a longshot be the word people would use to describe me with. Far from it. I would never have come up with it myself either.

But now, I feel it. It’s there. Deep down, I am calm. Something has shifted within! Now, that doesn’t mean I am calm all the time. Not with all people. Not in all situations, and so on. I can get really worked up and passionate, but that’s something else. Within there is a stillness, that I wouldn’t trade for the world. That stillness within comes from me being Me. Fully. It’s not something I’ve added. On the contrary, it’s me finding myself again, and letting my light shine.

What lies within you?