On Tuesday I did my 366th consecutive seven-workout, as logged on my #SevenApp, which you can see from the check mark after the ”There is no 7 month goal”-challenge. 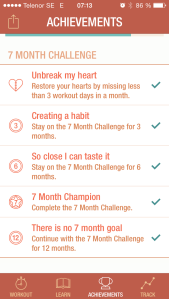 I’m at day 368 today, so I will just keep on going. One day at a time. And it’s interesting to do this, every day, because of my observations from day to day. Sometimes I am so tired, weak, my body heavy and almost immovable, making it feel very hard. Other days I am bouncing around, feeling light and strong, pushing myself and loving it. But I don’t do my seven-routine based on my daily mood. If I did, I would not be at a full year of daily seven’s, not even close! My daily seven-routine is done from another angle, from my desire to treat my body good, to give it a bit of a workout every day, stretching my muscles, getting my heart pumping, pushing my limits.

In short: my success is due to my long-term desire, rather than my in-the-moment-mood. Is it even possible to achieve something like this if the underlying driver is mood-based?

Today I pushed myself beyond my normal routine of doing a #Seven in the morning (Seven is an app – using the hashtag #SevenApp – which gives me 12 exercises to do, 30 seconds each, with 10 seconds of rest in between each), and did Seven times five instead of just one time around.

I did the workouts that have unlocked in my app (every second month of daily Sevens, a new workout with 12 new exercises gets unlocked):

And I have to tell you – that was really nice. I’m gonna try to do a round of Seven times five on a weekly basis, if nothing else for the wonderful feeling I have in my body right now. Arms, legs, chest, stomach and back, well, really my entire body has that heavy feel to it, from being utilized and stretched a bit beyond its normal use.

Doing a little bit of exercise on a daily habit works really well for me. And after 219 days of daily Seven’s I can feel the difference. So much so that today, I was able to do Seven times five, which I would have been hard pressed to accomplish 220 days ago.

Goes to show that a little bit, done in moderation, really does make a difference in the long run. Even though we often fool ourselves into thinking it’s All or Nothing. And I know for myself, that when I set very ambitious goals, and then one day fall through, based on my belief in the All or nothing-scenario, I usually become a drop out from my own goal. And doing these smaller, more moderate habits, have really helped me come to terms with my faulty thinking around All or Nothing, which generally, doesn’t serve me. So, I simply shrug my shoulders at those thoughts, when they come sneaking in, which they do from time to time. But I generally don’t entertain them.

What about you? Moderation rings a bell, or you’re an All or Nothing-kind of person? What usually serves you better?