I listened to Parker Palmer giving this commencement address to the graduating class at Naropa University, and several times I got goose bumps and shivers. For me, those have become telltale signs that there’s something important and/or very true being shared.

The six suggestions Parker provides on living a life worth exploring are simple. And powerful. So powerful I followed my urge to split this recommendation into six consecutive blog posts. You can read my thoughts on the first, second, third and fourth suggestion here.

The fifth suggestion is: Since suffering as well as joy comes with being human, I urge you to remember this: Violence is what happens when we don’t know what else to do with our suffering.

As Parker says, violence can be directed inwards as well as outwards. And it’s not the answer, it’s not. Hardest for me has been to stop being violent inwards. Beating myself up, verbally, in the harsh and terrifying inner chatter, that accompanied me for so long. It’s almost weird trying to look back at it. I have a hard time remembering what it sounded like, specifically, because it’s so far from the inner chatter within me right now. My mental chatter has shifted, and as a result. I don’t suffer as much either. It’s like a merry-go-round. I suffer, beat myself up over something, and then suffer more, think I’m a wimp for it, so I beat myself up over it some more…. and so on.

And now. A totally different tone. A gentleness. Towards me. And to think I only realized it was possible to be gentle towards myself around my 35th birthday. (Born in 1972, you do the maths.) When I stopped being harsh on myself (and yes, I do believe that to be a form of violence) something else became possible. Because at that time not only could I could start to take in all of my own feelings, I could also start to take you in. And with that, your suffering no longer scared me (as much anyway). Being less likely to want to thrash out, verbally or physically, at your ways to try to escape your suffering. Understanding it doesn’t say much – if anything – about me, and everything about you.

Me being ok with feelings of suffering (both my own, and yours), those same feelings seem to pass through me quicker and more easily. The rabbit holes of my past used to be so deep it took me forever to get out of them. Now I fall into them, but not as deep, and not for as long. Maybe because I no longer fight desperately to get out of them?

Jon Stewart is clear about what his job entails, and on my birthday he chose to not do it on account of the Charleston church shootings. And boy does he do a good job of explaining why:

”I honestly have nothing other than sadness that once again we have to peer into the abyss of the depraved violence that we do to each other and the nexus of a just gaping racial wound that will not heal yet we pretend doesn’t exist. I’m confident though that by acknowledging it—by staring into it—we still won’t do jack shit. That’s us. And that’s the part that blows my mind…”

Like Jon Stewart, I can get absolutely paralyzed from the despair of witnessing that which we humans do unto each other. But I cannot allow myself to get stuck there; I chose not to stay there, because from that place I don’t have the ability to act. I freeze into nothingness there. That’s the place of doing jack shit.

I need to take the leap into hope, to love, because from that place I can act. And we all can. Act, I mean. We cannot save the world entire, by ourselves, but I can do my part. And you can do yours. Perhaps that’s the first step? The realization that my part plays a roll?

That’s a line I never thought I’d write, but Steven Pinker has an interesting rationale for stating that the world needs a more economist way of thinking. The way he describes it closely resembles a question I’ve entertained personally hundreds, if not thousands of times in the past 3-4 years: Does it serve me or not?

Curious as to what I’m talking about?

Believe it or not, it’s another excellent show from London Real, featuring Steven Pinker. The episode was originally aired in 2013 if I understand it correctly, but it was just published again, so I picked up on it.

And I’m very happy I did. It’s an episode spanning all sorts of things, from Noam Chomsky to gun-control in the US, from linguistics to hunter-gatherer tribes, from what makes us tick to bullying, from economic thinking and utilitarianism to religion and the ever-decreasing amount of violence in the world. And just about everything in-between as well.

It’s a strangely optimistic podcast. After listening to it I have an urge to encourage more people to listen to it, if nothing else to hear Pinker explain the decline of violence, which he does in the beginning of the show.

He says (paraphrased):
If you paint your image of the world based (solely) on news sites, you will surely believe the world is more and more violent and evil, since the news media show that which happens (homicide, mass murder, war, terrorist attacks etc), and not that which doesn’t happen.

He makes a good point there, because news is about what happens. So even though there is less and less violence in the world, of which there is no doubt, news media will pick up on the violence that is there, because what would be the newsworthiness of a peaceful street corner of a previously violence-ridden neighborhood? None, or so it seems.

Steven Pinker seems to be a genuinely curious person, and he’s asking questions constantly in the podcast. Quite inspirational, I must say, and it makes me more curious about him. So he leaves me intrigued, and I am gonna listen to the podcast at least once more, to see if the connection between Pinker’s ”economist way of thinking” actually is similar to the way I use the question ”Does it serve me” or not.

When you read ”We need a more economist way of thinking in the world?” – what does that provoke in you?

Via Troed Troedson I found this interview with Hermann Göring:
Interview with Gustave Gilbert in Göring’s jail cell during the Nuremberg War Crimes Trials (18 April 1946).

Göring: Why, of course, the people don’t want war. Why would some poor slob on a farm want to risk his life in a war when the best that he can get out of it is to come back to his farm in one piece? Naturally, the common people don’t want war; neither in Russia nor in England nor in America, nor for that matter in Germany.

That is understood. But, after all, it is the leaders of the country who determine the policy and it is always a simple matter to drag the people along, whether it is a democracy or a fascist dictatorship or a Parliament or a Communist dictatorship.

Gilbert: There is one difference. In a democracy, the people have some say in the matter through their elected representatives, and in the United States only Congress can declare wars.

Göring: Oh, that is all well and good, but, voice or no voice, the people can always be brought to the bidding of the leaders. That is easy. All you have to do is tell them they are being attacked and denounce the pacifists for lack of patriotism and exposing the country to danger. It works the same way in any country. 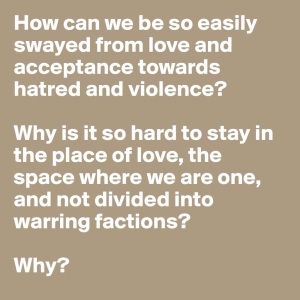 Isn’t it scary how much truth there is to this quote, even today? It really makes me realize the importance of the leaders we chose to vote for/believe in/trust with governing our countries.

How can we – the people, the masses – be so easily swayed from love and acceptance towards hatred and violence? Why is it so hard to stay in the place of love, the space where we are one, and not divided into warring factions?

Stumbled upon a video from Upworthy of Patrick Stewart answering a question from the audience, and now here I am, with tears streaming down my face.

Heather Skye, the lady who asked the question, blogs about what Patricks powerful response made possible for her. After reading that, even more tears are shed. 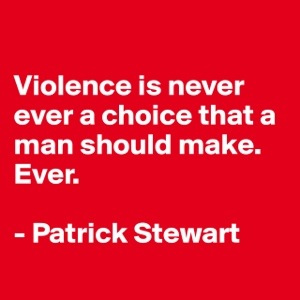 Violence can come in many forms.
Violence can be perpetrated by any human being.
But violence is never the answer.

Together we can create a better world, a world that works. To get there, we must each take a look at ourselves and ensure we do what we can to do our part.

Ask yourself:
What do I bring to the world?