That’s a line I never thought I’d write, but Steven Pinker has an interesting rationale for stating that the world needs a more economist way of thinking. The way he describes it closely resembles a question I’ve entertained personally hundreds, if not thousands of times in the past 3-4 years: Does it serve me or not? 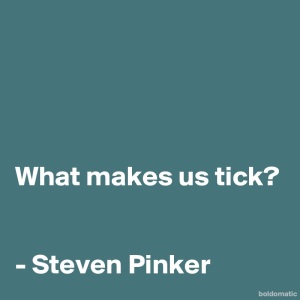 Curious as to what I’m talking about?

Believe it or not, it’s another excellent show from London Real, featuring Steven Pinker. The episode was originally aired in 2013 if I understand it correctly, but it was just published again, so I picked up on it.

And I’m very happy I did. It’s an episode spanning all sorts of things, from Noam Chomsky to gun-control in the US, from linguistics to hunter-gatherer tribes, from what makes us tick to bullying, from economic thinking and utilitarianism to religion and the ever-decreasing amount of violence in the world. And just about everything in-between as well.

It’s a strangely optimistic podcast. After listening to it I have an urge to encourage more people to listen to it, if nothing else to hear Pinker explain the decline of violence, which he does in the beginning of the show.

He says (paraphrased):
If you paint your image of the world based (solely) on news sites, you will surely believe the world is more and more violent and evil, since the news media show that which happens (homicide, mass murder, war, terrorist attacks etc), and not that which doesn’t happen.

He makes a good point there, because news is about what happens. So even though there is less and less violence in the world, of which there is no doubt, news media will pick up on the violence that is there, because what would be the newsworthiness of a peaceful street corner of a previously violence-ridden neighborhood? None, or so it seems.

Steven Pinker seems to be a genuinely curious person, and he’s asking questions constantly in the podcast. Quite inspirational, I must say, and it makes me more curious about him. So he leaves me intrigued, and I am gonna listen to the podcast at least once more, to see if the connection between Pinker’s ”economist way of thinking” actually is similar to the way I use the question ”Does it serve me” or not.

When you read ”We need a more economist way of thinking in the world?” – what does that provoke in you?