Watched The Cove with my husband. He’s seen it before, but was glad to watch it again with me. Or rather, glad might not be the proper word for it, he warned me I might not sleep soundly after watching it, but at the same time ensured me it was worth watching.

And he’s right. It is a movie worth watching. But at the same time it’s a movie that is dreadfully depressing. I have a hard time to fathom how lethal and cruel man can be. Mankind is lethal for everything and everyone, including ourselves. This is one of those movies I would like for everyone to watch. So please, if you have avoided this, in the same way I have, please watch it. It will make you tense up, and become horrified, but it must be watched!

Paul Watson, the famous environmental activist, quotes Margaret Mead when being interviewed in the movie, and this is the piece of hope I bring with me from it: 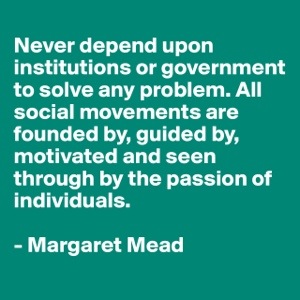 And in a strange way, I agree with that. It seems like that’s the way of the world. Hopefully not 100%, but still… I cannot help but feel that way too many governments, authorities and institutions seem to get lost in their How’s, while forgetting their Why. And that’s when it all goes to pieces. Sooner or later. And The Cove is a clear example of that.

Sign the petition like I did, or do something else to stop this senseless annual atrocity! Hopefully the slaughter will stop completely, but the number of dolphins killed each year have diminished since The Cove was released. So keep on being a passionate individual, because that’s what makes the world a better place!

My passion lies with the #schoolspring, aka #skolvåren – where is yours?