In Sweden we have an old radio tradition dating back to 1959 called Sommar i P1. That means ”Summer in program 1” and I’ve never heard it presented in anything other than Swedish. However, for some reason, of which I am very grateful, one of the best episodes of this summer, with environmental scientist Johan Rockström, suddenly showed up, in an English version. He gave his original Sommar-show in Swedish, and if you know the language, I’d recommend that. But if you aren’t one of the fewer than 10 million people worldwide who know Swedish, please make sure you listen to the English version!

As a person with a strong environmental interest there were a lot of facts in this podcast that I already knew about. Some that I think I’ve forgotten but now have a revived understanding about, and, interestingly enough, quite a few new facts and figures to me. 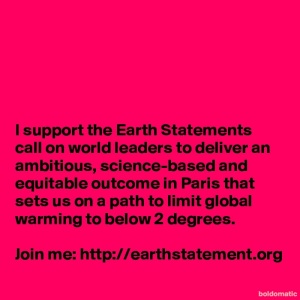 Johan Rockström provides some devastating pieces of information, regarding our world and what humans are doing to it, but he has an optimism to him, that makes this episode strangely uplifting, despite the grim realities of climate changes and the likes, that we face.

One of the things that Johan Rockström have initiated is The Earth Statement, which is something I had not heard of before I listened to this podcast (which I’ve done three times, by now), but since then I’ve become a supporter, adding my name to the list of many others.
Check it out yourself: http://earthstatement.org or perhaps you already have?