Was working in the garden yesterday, listening to a podcast from the RSA on something or other. Don’t quite remember actually. Anyway, as I was cutting up branches for the garden bin, sweeping up old leaves from the outside seating area and other typical ”it’s spring and there’s stuff to get done in the garden”-stuff, when one show from the RSA ended, a new one automatically began. That’s how I ended up listening to a pod on UKIP and the left behind: what a new party tells us about modern Britain. This is not an episode I would have put on from reading the heading, but I’m very glad that I got to listen to it. So I decided to make it the 15th podcast recommendation from me this year. (By the way, you can watch it as well if you prefer that. I don’t.) 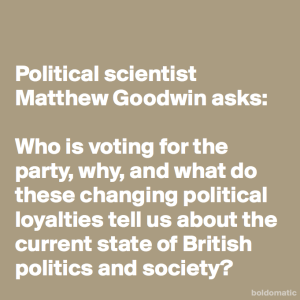 I don’t know much about the Swedish Democrats, honestly, and I certainly know even less about the UKIP in the UK, but as I listened I wondered if there are more similarities between the two parties, and the trends in the respective countries, or if what’s happening is totally different in Sweden and the UK?

I don’t know. Still. I haven’t gotten any answers to my pondering. But perhaps you know, and can help me learn more about this? Articles to read? Pods to listen to?