Saw part of a quote on Facebook, posted by True Activist. 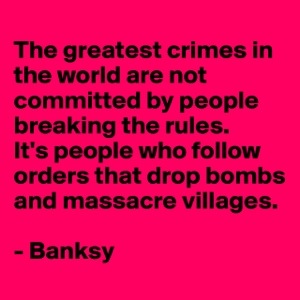 Here’s the quote, spoken by Banksy, in its totality:

The greatest crimes in the world are not committed by people breaking the rules. It’s people who follow orders that drop bombs and massacre villages. As a precaution to ever committing major acts of evil it is our solemn duty never to do what we’re told, this is the only way we can be sure.

I would lie if I said it isn’t ”easier” with obedient people. Of course it is. Obedient people don’t ask Why, they don’t challenge me, they don’t talk back or question my actions or orders.

Children, by their very nature, seems to be full of Why’s. But something happens along the way to adulthood, somewhere the desire and curiosity sparking the question Why is trampled upon, frowned upon, ridiculed, considered a nuisance. So the children, as a means to survive, stop asking Why. They hold their tongue, and slowly start to die, to become something other than themselves. Finally the day comes when they have forgotten their true self, and have completely conformed to a society demanding their obedience.

But beware the inherent danger that comes along with said obedience!

I’d much rather have a world full of people asking Why, than a world full of obedient people blindly following orders. Which world would you prefer? And what steps are you taking to creating that world?